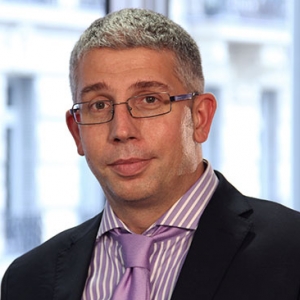 Eighty percent of the 33,000 Vateliens throughout the entire globe have remained in the hotel and tourist management sectors. Jean-Philippe Pelou-Daniel, who graduated from Vatel in Lyon in 1990, is one of the 20% who work in a different field, where the RH department was convinced of the qualities and skills of this Vatel alumnus.

For the past two years, Jean-Philippe Pelou-Daniel has been the General Manager of the La Part Dieu Shopping Center in Lyon, the largest European urban shopping center, in France’s second largest business zone.

He’ll tell us how he went from hotel management to managing a shopping center with 276 different stores. But when you look a bit closer, it’s not actually that different.

What did you do before attending Vatel? Why Vatel?

I was born in Lyon, and that is the city where my heart lies. I graduated from the Saint Just High School in the 5th district of Lyon, with a major in business administration. I was always a good student until I finished middle school, and then I had only one idea: that was to work in the hospitality industry. After middle school, I was tired of school and wanted to start working directly. But you know parents - they insist that you graduate from high school, so I really had no other choice and had to put off, impatiently, what I really wanted to do. After graduating from high school, I was finally able to study in the field I had always dreamed of. So I enrolled in Vatel in Lyon in 1988, and that’s when I started enjoying school again.

What do you remember the most about when you attended Vatel? A story to tell?

People and their values are what I remember the most at Vatel. I have very fond memories of Mrs. Jocelyne Sebban, who was like a mother for all her students. Though she was always warm and caring, she however never hesitated a second to put us back on the straight and narrow path when we needed this.

More than merely being a school, there is a “Vatel spirit” and “Vatel values.” Human values that teach you humility, the sense of service as well as sincerely welcoming others. Vatel made me the person in the front line that I am today, close to the men and women with whom I work as well as a man who knows what he wants and who believes in his own values.

What have you done since you graduated? What opportunities have you had?

I received my French BTS Vatel diploma in 1990. After that I did my mandatory military service at the Officer’s Mess in Fribourg. For one year I was in charge of organizing the departures of the FFA (French Forces in Germany).

When I finished, I went to Paris where I found my first job at the reception desk of the Baltimore four-star Hotel in the 16th district of Paris, between the Arch of Triumph and the Eiffel Tower. Pretty nice place to work for a first job, in a beautiful and historical venue.

A year and a half later, I started working in another branch of the Vivendi group. I became Deputy Manager of three two and three star hotels in the Latin Quarter. Beautiful little gems. Right after that I came back to Lyon for the opening of the Libertel Wilson three star Hotel, where I was the Hotel Manager for four years.

Then I managed a four-star hotel residence in Strasbourg, still with the Vivendi group, and after that I started working with Accor. For eight years I managed two Mercure hotels and restaurants at the same time, and then a Novotel. That adds up to 11 years in Strasbourg including eight with Accor.

The day that I turned 40, I changed jobs, and joined the Unibail Rodamco group. The Novotel that I had been managing was located in a shopping center and Hamerson Group asked me if I’d be interested in managing this shopping center. At the beginning I turned them down. But when Unibail, the European benchmark, came back to me with the same request, I ended up saying yes. So I became a Shopping Center Manager and I opened the Rivetoile Center in Strasbourg.

So could you explain how your experience in hotel management made you such a good candidate to manage a shopping center?

At the beginning, I didn’t feel that I had a completely new job at all. Managing a hotel and managing a shopping center have a lot of things in common. Instead of managing rooms, I manage shops. And I can convey to my customers the same values of warmly welcoming them as in a hotel. For example, when you arrive in Part Dieu, there’s a reception area, just like in a hotel. We created water shows, “IPad Bars” and an interactive area for children. I have introduced many services for customers.

Unibail Rodamco has introduced a four-star label for shopping centers. And with this type of new service, I can use my hotel experience: customer satisfaction is in the heart of everything. Right now I am preparing the file for the Part Dieu shopping center certification next September.

Is there anything you’d like to tell candidates who are thinking of enrolling in Vatel and students?

What makes Vatel stand out from other schools in the hospitality field, is the fact that they’ve understood that you have to be confronted with the realities of this job as young as possible and for the longest time possible. Even if sometimes practical application work seems to take forever and internships seem long, this is the very thing that will allow you, later on, to be more performing than the others in your profession.

After that, the values that Vatel teaches you when you are studying, remain an asset both in your professional and personal lives, as long as you embrace them without reservations. So my advice to candidates who are being interviewed would be to speak about your values and to learn what the values the company has. But be careful; there’s no cheating here. Either you believe them because they are also your values, or the recruiter sitting across from you will see right away that it’s not true.