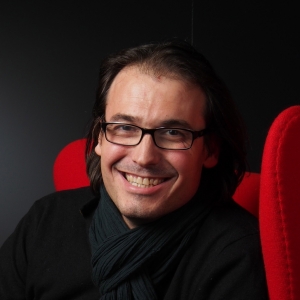 “I love my city. I love hearing that it’s the most beautiful city in Europe.” This Vatelien turned his love for Lyon into his job, and gave those living in or visiting Lyon their first imperial bus tour with Opentours.

In his Success Story he’ll tell us how he began in luxury hotels, how he took over his family-owned company and give you some good advice.

Olivier Michel, after you graduated from Vatel Lyon, you began working in prestigious hotels: George V, Four Seasons and the Marriott. What kind of jobs did you have and what kind of opportunities came knocking on your door?

All these different jobs came from people I met as time went by and led to new opportunities I was able to seize. Then it was my work and involvement in each job that allowed me to be promoted to the next one.

In 2004, you became an entrepreneur, heading a business when you acquired the up-market N&M transportation company. Why did you make this decision?

As my father was also an entrepreneur and his family had also been in the transportation business for 125 years, I wanted to work with my father. An obvious choice as N&M was up for sale. N&M mirrored what I had experienced in luxury hotels.

Can you tell us a bit about it?

N&M is a roadway transportation company for passengers specialized in up-market services. We bring solutions in terms of logistics and transportation for our customers.

We offer transfers between train stations, airports, congress hall, and special events. We also do days in Lyon and in the Rhone-Alps region, evenings, city visits, tourist or industrial sites, etc. We propose up-market buses with 1 to 49 seats adapted to group travel.

For me, this naturally follows what I did when I was working in luxury hotels. We are a complement to business tourism activities for hotels, congress centers, restaurants, etc.

In 2005, you launched the “Lyon Le Grand Tour” sightseeing tour. How did you get this idea and what did it take to put it in place?

When we acquired the N&M bus company in 2004, we had the opportunity of meeting with those who launched Opentours in Paris. After they had launched an Opentour in Nice and Marseille, they were looking for a partner in Lyon.So we jumped on this opportunity to develop this activity in Lyon. This is the reason why we changed our name this year to Lyon L'OpenTour.

How did your hospitality profile and Vatel training contribute, even partially, to your success?

Since 2011, you have been leading the Rhone Alps Young Business Managers Center and in July, 2014 you became the President of this Center, which as nearly 480 members. Can you tell us a bit about this Center, its missions and your ambitions?

The Young Business Managers Center is an entrepreneurial center for those who have their own companies. There are 4,200 of us in France and 800 more abroad. It’s the oldest employers’ organization in France, as it was founded in 1938.The Center targets five different subjects which are training, influence, reflection, experimentation and sustainability. We also work on global performance, well-being in the workplace, youth and flexibility.

I’d like to invite each business owner to come and meet others like him or her, plus training as an entrepreneur who runs a company by clicking HERE.

What advice for the future would you like to give Vatel students?

Give yourselves the means to succeed, the future belongs to you. Don’t hesitate to go abroad and discover other parts of the world to enrich yourselves with different cultures.

What are your medium and long-term projects?

We are going to launch a futurist tourist train on the slopes of the Croix Rousse.

A message from Alain Sebban on the re-opening of Vatel schools.

It is with great joy that we welcome our students back to Vatel schools. Of course, the virus is still around and so. we must all – cheerfully - respect the health measures put in place in our schools and training restaurants and hotels.

Our mission : preparing the younger generations for a successful career in International Hotel and Tourism Management

The hospitality and tourism industry puts people in touch with an ever-increasing and constantly changing world, making it the only one of its kind.

Hospitality: the field with a thousand facets

Serving others is a priceless quality in the hospitality industry, but not just there. Students with a degree in hotel management are attractive to employers: their qualities make them champions in all types of professions.

The 26th Eurhodip conference took place in Istanbul from October 16 though 20th, with the theme “Together, let’s build bridges.” Roughly a hundred participants from 25 countries and 35 schools attended this event.

With schools throughout the world, nearly four decades of development, the art of hospitality raised to its highest level... And at the heart of the curriculum that made the group’s world recognition: the professors, heralds of Vatel pedagogy.

Each year our Group School directors, getting together for the Vatel International Convention, use today’s experiences to continue to invent tomorrow’s schools for our future hospitality professionals.

Learning how to exceed the profession's expectations

Vatel cultivates the qualities required to be a good professional in the hospitality industry: being fluent in foreign languages, knowing how to work with other cultures... Hoteliers are attracted by Vatel students’ resumes, as Vateliens can tell us.

François Perraud feels both a hotelier and a financial controller, an expertise that he likes to pass on to Vatel students.

And if we could all create happiness...

Jeremie de Fombelle has always loved resorts and has seen many of them, before coming to Mauritius. And this is where he really fell in love! But economic competition is stiff. How can you stand out, if not by the quality of your management?

Every day, Vatel students and instructors prepare for class, study, and fan the flames of their curiosity, thanks to the cutting-edge digital library provided by the ScholarVox platform. Come right this way for digital access to knowledge!

An MBA specializing in ecotourism opens in Madagascar. This island has all it takes to materialize this demanding approach of responsible and innovative tourism.

New ideas, enthusiasm, the desire to embrace a gourmet universe: Jerome Ferrer’s story has all the ingredients that inspire the best “success stories” to strategy professors!

Tomorrow’s hospitality will be green and virtuous

The hospitality and tourism industries are particularly concerned by sustainable development. And what if Vatel alumni played a key part in this transition towards more environmentally friendly hotel management?

Read more
Success at the top

Cultivating the art of being a Vatelien

Besides having a Bachelor or an MBA Vatel, what does being a Vatelien mean?

Throughout their entire careers, Vatel alumni remain in touch with their schools. This is also true for Kevin Tessieux, who has never forgotten that he was also once a student, and who now shares this knowledge with students today.

Art and catering: a tasty association

Chahrazade Baroudi, a Vatelien since 2013, describes her job as Marketing and Communication Manager in IDAM, Alain Ducasse’s restaurant on the top floor of the Doha Museum of Islamic Art, in Qatar.

Future hospitality professionals, welcome to Vatel’s 100% management simulation serious game! For an entire week and on three continents, MBA students met the challenge of managing a 4-star hotel and a resort in the Indian Ocean. The winners are...

Read more
No one can beat a Vatel alumnus to coordinate the Vateliens network!

Who is Gaelle Garnier, the new manager of the network of 35,000 Vatel alumni throughout the world? Let’s meet a Vatelien who works with Vateliens!

Training in sustainable development: stakes for the future

The 25th Eurhodip conference, which Vatel took part in, took place in Croatia. Targeting responsible tourism, this conference allowed participants to have more information on opening higher education courses in the field of sustainable development.

Designed to address the needs of the global hospitality industry, the Marco Polo program strengthens the international profile Vatel students have and has just received the prestigious Best Innovation in an Educational Program Award.

International is the secret...

Graduated in 2011, Alexis Bouche began his career in England. Six years later, he returned to France and is now the Sales Manager of the 5-star hotel, Villa Maïa.

Nearly 40 years old, and now 50 campuses in 32 different countries: Vatel Group opened its first school in Paris and is continuing to grow and duplicate its innovative educational concept in schools abroad.

Trained at Vatel Nimes ten years ago, Chloe Wu has a brilliant career in China. She no longer works in the hospitality industry, but has not forgotten her passion of hospitality and service...

The Vatel International Research Center in Hotel and Tourism Managementhas just published the 10th edition of its Journal, which targets research and reflections on changes taking place in the hospitality and tourism industries.

Vateliens, ambassadors of the Vatel spirit

Curiosity, humility, team spirit... A Vatelien shares his commitment to values his school transmitted to him.

The same international spirit that students have Vatel and 4 students in nursing undertake a humanitarian project in Madagascar.

A traveler - salesman - ambassador, Marco Polo introduced Asia, at that time nearly unknown, to Europe. This inspirational fate has given its name to Vatel’s international exchange program, where students can study at another Vatel campus for a year.

The most senior representatives in the international hospitality industry give Vatel the Best School Hospitality Award. An entire profession thus acclaims them.

Learning the skills needed to be a manager, quick employability, international careers... Vatel, the passport that gets you hired. See the video.

Read more
Press Books
OUR MISSION - Preparing the younger generations for a successful career in International Hotel and Tourism Management
Find your course in 3 steps Request the brochure Send a message
Vatel serves cookies to analyse traffic to this site. Information about your use of our site is shared with Google for that purpose. Read moreOK